Excuse me. I am sorry, but your ignorance is showing.

I am Bipolar, my husband has ADHD ( we didn't not realize this until our son was diagnosed. Too many similarities.) There are many family members with Asperger's  (High functioning Autism). Two of my children (if not all 3... My youngest is showing signs) have ADHD.  My son's ADHD is pretty severe and he has a mood disorder. My eldest daughter has all 3: ASPERGER's, ADHD and Bipolar. She calls herself a Trifecta. I thinks she's more like a triple threat!

If you think for a minute, I haven't tried it all, think again.  I too know enough and been through enough. All it has taught me, is that every person's situation is different and to judge others based on your experiences is nothing but ignorance. Diet does not cure true ADHD. It may elevate some symptoms in some people, but not all. And when you stop said diet, it all comes back. Ya. Not a cure.

BTW, some of us have to be "drugged for life" and are very happy said drugs exist. Without them, I would not be alive today. And, Thanks to those drugs, you wouldn't know my illness if you met me. You definitely wouldn't know I was "drugged." And for all that, I am beyond thankful.

So, you go right ahead and go to your expensive doc. Just don't preach about the pharmacy taking all my money. I spend less than you do and my kids are just as happy. But hey, if the diet is working for you? Awesome. To each their own.

Just don't think for minute you know what is best for me and my kids or Joe Blow and his. Because honey? You're clueless.

Sexism, Racism, and All Other Discriminatory Ism's Need to Just Stop! (Or... Rapper T.I. Said Whaaaat?)

“Just because every other position that exists, I think a woman could do well,” the “Whatever You Like“ rapper said. “But the president, it’s kind of like, I just know that women make rash decisions emotionally — they make very permanent, cemented decisions — and then later, it’s kind of like it didn’t happen or they didn’t mean for it to happen.”

He later went on to say the world wasn't ready for a female president. That is exactly what people said about African Americans when President Obama ran. He's been in office for 8 years. *looks around* Planet hasn't imploded yet!

And, what the hell?!? Why is it OK to say that? It's not ok to say you don't want a particular race. Why gender? Why jump to the stereo type that all women are rash decision makers? Wtf? You could say the same about some men.

Honestly, this is why I can't handle discrimination. It sucks! Between being a woman and being disabled, I get it. Yes, some of the reasons are different. But really, the shit ass reasons are the same. Assumptions and stereotypes!! Don't assume you know a person based on what you see and have been told. Dont base it on what one or a hundred people did or did not do. Not all of us are the same!  Whether the person is black, white, tall, short, dark haired, light haired, blue eyed, black eyed, fat or thin, Democrat Republican, rapper, classical musician, hates all music, deaf, blind, disabled, able bodied, able minded, rich, poor, straight, LGBTQ, religious, atheist,  high IQ, low IQ, artistic inclined or can only scribble or any where in between.... they are unique.

You can not assume that all women are rash decision makers! Just like you can't assume that all whites are rascist or all blacks are hoodlums. (Or vice versa!) Or that everyone with a mental illness is dangerous. (Oh, ya knew I was going to throw that in there.)

I could keep going with this. I really could. But I won't.   Just do me a favor and stop the stereo types. Stop the aasumptions. Stop the double standards. It's all bullshit. All it does is perpetuate hate.

Note: Rapper T.I. did later sent out a tweet apologizing for what he said, saying it was "unequivocally insensitive and wrong." I'm think an apology is nice, but changing your way of thinking would be better.

Here is the link to where I got his quote and tweet from, if you would like to read more.

Now, me personally, I'd love to see a heavy set, rapping, disabled, Native American woman and her wife with several adopted children run for president. If anything, to see how many would pay attention to her platform. Forget the world not being ready. Why not make the world explode! Change is good.

Recently, I got an email from a great company informing me I would soon be receiving a package. That company was Influenster and that package was a VoxBox. Now, I have received a few such boxes in the past and have always been super happy with what I have found inside. Needless to say, I was truly excited.

Reading further into the email, I realized it was for Hellmann's mayonnaise. Mayo? In a box? I was intrigued. Why would Hellmann's be sending mayo to testers on the West Coast? Hellmann's is an East Coast thing. Here Hellmann's goes by the name Best Food's. (You know, kind of like how Hardy's back East is Carl's Jr. here on in the West? Ya. Weird, but true.) I was doubting that was the reason for the VoxBox, but it did make me wonder. Eagerly, I waited for the box.

When it arrived, I ripped that sucker open like it was a chocolate Santa on Christmas morning. What could it be?!? A new flavor? A name change? New packaging?  AH!  NEW PACKAGING!!! So, naturally, I  whipped out my camera and conducted a full on photo shoot and unboxing video. Who wouldn't?
Read more »
Posted by Unknown at 12:22 PM No comments:

One New Blog and Almost a Year Later...

It has been a long time. I know. But, since the last time I posted, a lot has developed.  So as to keep this short, I will summarize in bullets.

* I started a new blog. In the attempt to focus more on my Bipolar Disorder (and my daughter's) I created Blissful Bipolar Blues. I had every intention to keep up with.  However, much like with this blog... life, and (ironically) my disorder got in the way.

Welcome back!  Seems my posts about Baker, CA have brought quite a bit of attention to my blog.  Whether you landed here in your search for aliens, beef jerky, or extremely large (and rather elusive) thermometers... GREETINGS!  And welcome.

Ok, back to Baker.  (If this is your first time here and you actually want the back story, you can start reading here.  However, it is not absolutely necessary.)

Before we get to the World's Largest Thermometer! I feel the need to mention another stop in Baker.  One that made Guy Fieri's "Diners, Drive-ins, and Dives" featured on the Food Network, The Mad Greek. Signs were everywhere clamoring for my attention stating they were "World Famous." However, I was not that hungry, I am not a huge fan of Greek food, and I had my sites set on bigger things. Much. Bigger. Although, in hindsight, I could kick myself for not at least taking pictures of the place.  But, like I said, I was preoccupied. That and I had my Mom's voice nagging me about the whole "Ball of Twine" thing.

Better than The Biggest Ball of Twine (part 2) or Alien Fresh Jerky - The inside!

Yesterday, I showed you the outside of Alien Fresh Jerky.  Today, I take you inside.  With out all the extra chatter, let's get right into the pictures. Now, keep in mind we didn't take pictures of everything. I didn't want to look like a desperate blogger in need of something to write about, so we aimed for pathetic tourist instead.  So ya, we didn't miss much.

Like any good Alien based tourist attraction, there were plenty of little visitors on hand to welcome us: 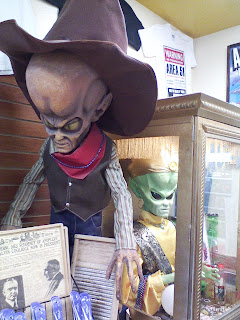 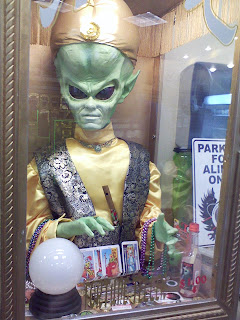 Better Than The Biggest Ball of Twine!

Over this last weekend, I got to scratch something off my bucket list.  But first, a quick back story:

At 3:08 am on September the 16th, my beloved Grandmother passed away.  She was my very last grandparent. 2 days later, I turned 40. In short, life stared me straight in the eyes and bitch slapped me hard with reality.  Then, to add to my already altered state of mind, I was tossed into our SUV and subjected to 12 hours of close confined and torturous hell with my Father, Bruce and our 3 lovely children.  (Yes, you should assume a sarcastic tone when you read the "lovely" part.) Our destination? Laughlin (and then Las Vegas), Nevada.  And the only thing worse, was the 14+ hour ride home.

But it wasn't all bad. --  Yes.  I played a bit and lost. But that wasn't the highlight of the trip.